An Alternative definition of ‘Haute Couture’ with Brielle 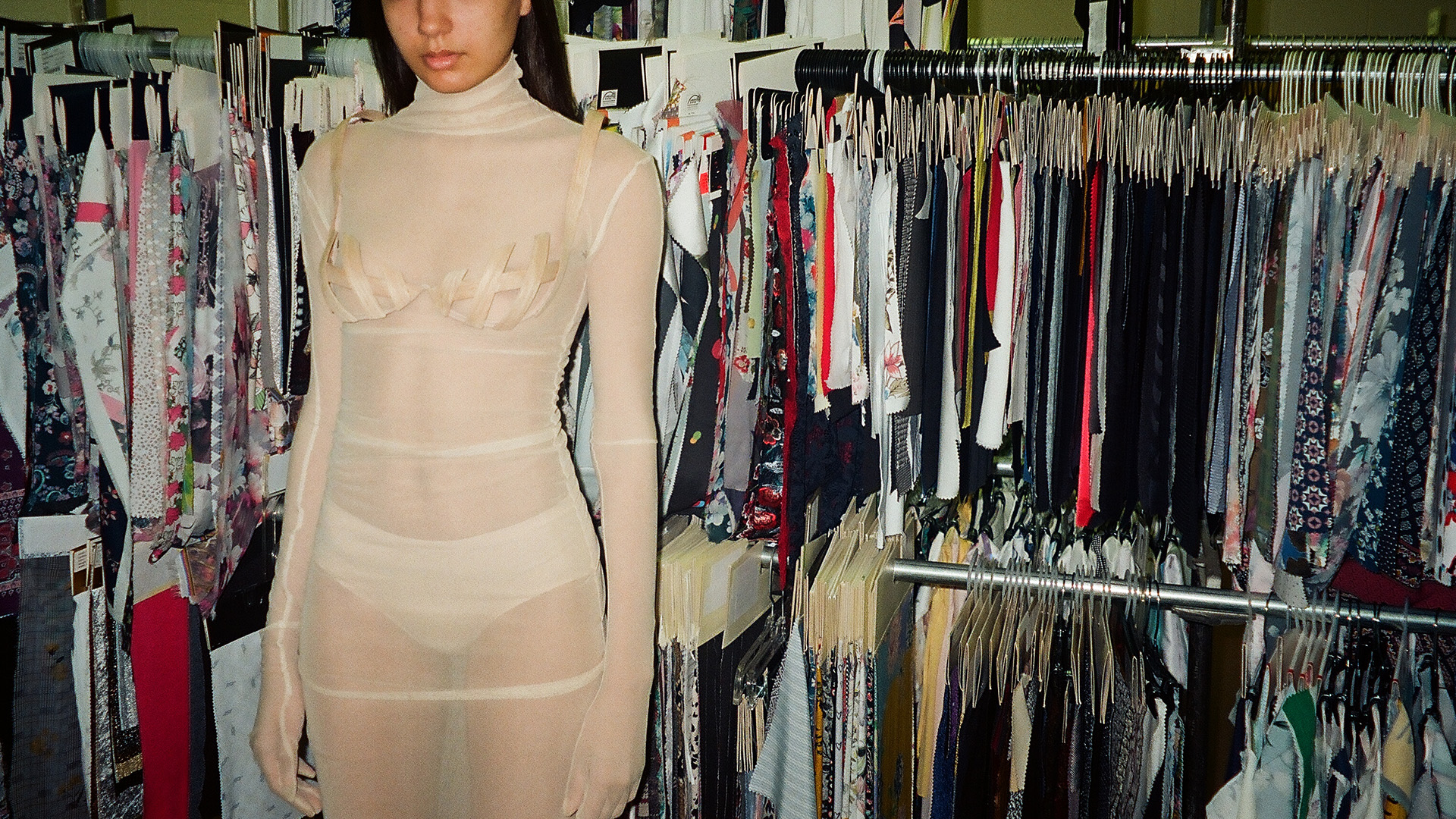 In this quest to breakdown the traditional system, I often look at the cities that we do not expect to be mentioned when speaking about the fashion industry. I explored this topic a while ago with an interview of ‘3 designers with an unexpected location‘. We are used to look at specific countries when it comes to fashion design industry. This mistake is easy to make especially since leading medias are focused on these cities and endlessly promote them. But as proven before, the reality is a much more widespread creativity– when it comes to fashion it can be found in every part of the world. We have the perfect example with cities such as Montreal. In the past, it had an affluence period with the famous fashion centre: Chabanel St. Confronting globalisation, a lot of factories have struggled to keep their businesses open while facing brutal external competition.

However, the creativity in Montreal hasn’t faded, it is alive and well and continues to flourish. Through young designers such as Gabrielle, who are skilled in the technical aspects of design, we can clearly see the potential of this city. Founder of her own brand Brielle, Gabrielle is a perfect illustration of the talent that can be found in Montreal. She started as a ski racer on the FIS circuit. After a failed knee surgery, she turned her passion to fashion design. Now fashion is her main focus and we have to admit, what a blessing!

‘My name is Gabrielle Szynkarsky, I am born in Montreal. My mom is French Canadian, my dad is English, so I am fluently bilingual. I started skiing when I was 6 years old and became an alpine competitive ski racer at the age of 8 until I was 19. It was my whole world. I spent the last 3 years of high school at a Vermont Ski Acadamy (GMVS). Skiing was my first passion before pursuing my interest in fashion. My mom is a fashion designer so I always had it in me, and had planned to shift into fashion later. A career as an athlete in ski racing doesn’t last forever, at some point your knees (or any other part of your body) give out. I had a knee surgery when I was 15 after struggling with knee pain for a long time. After many complications following the surgery, my doctor told me I had to retire. That day broke my heart and continues to haunt me. I get really emotional talking about it. I was thinking ‘God what am I going to do?’ I decided the only way was forward and enrolled in fashion design at Lasalle College.’

‘I felt out of place at first because I hadn’t been to a “normal school” in a long time. I was always at boarding school, skiing or training in the morning and attending classes later in the afternoon. It felt odd to be back in Montreal in a more traditionally structured school system. I felt a bit like an outsider. At first, I was really lost which was something I hadn’t experienced in my life before. I always had skiing and knew exactly what I wanted. I was very disciplined, never went off the tracks and now I was totally derailed. Safe to say, this new chapter would be challenging as I was shifting from one world to another. I knew I had a strong artistic side; I would draw all the time at boarding school. In my first year at Lasalle College I did a pop-up shop to launch the beginning of my brand. I decided if I was going to do this I was going to go all out. Skiing requires 100km/h speeds and I planned to bring the same momentum to my fashion career. As we say in skiing “GO BIG OR GO HOME”. Coming into LaSalle I didn’t even know how to sew but within 6 months– maybe less – I had already created my own brand.’

While studying, she started with a streetwear collection that she defines today as ‘not my aesthetic at all‘. This learning period lead her to her current designs which are almost exclusively ‘Haute Couture’ – especially when looking at the techniques used in her last collections. Totally aware of the risks associated with’Haute Couture’, Gabrielle explains that she is always up to a challenge. However for this ex ski racer, the discipline required by this segment won’t be a problem. When I look at Gabrielle’s creations, I can see how the notion of ‘Haute-Couture’ and its imaginary will be totally questioned and redefined in the upcoming years by designers just like her. By using a systematic approach that is as relevant as technics used by established labels, her last two collections are a living proof of a perilous and elaborated design research. Her wood creations are at the same time an ode to nature and pure art pieces.

‘ My SS20 collection ‘LIGNUM” is an extension of my SS19 collection entitled ‘BIOPHILIA’ but upgraded and expanded on many levels. Using natural materials, like wood, was the fundamental concept behind both seasons. For my Lignum garments I used an advanced technique. I bent wooden pieces to form the exterior of each garment. This was challenging, I will not lie. I had to create my own technique. Each piece of wood was not going to be the same shape, I couldn’t use a mould. I was required to manually shape everything myself as I advanced. Sometimes the wood would crack, and I had to restart. Each piece/strip of wood took thirty minutes to make. The dress from my SS20 took me 6 months! ‘BIOPHILIA’ is the attraction of humans to nature. The building I used for my editorial photoshoot used Biophilic architecture and it inspired me so much. This approach is good for the planet, but also for people. Research shows that having wood in hospitals, helps reduce stress and raise spirits. ‘

‘With everything going on, using natural materials should be prioritized. It is hard to do it for each collection and every piece. I know that this is a challenge, but so far it is a challenge I want to take on. I am trying as much as possible to source natural materials to make my clothes. Everyone in their occupation has a way of helping the world. No matter what you do, we are all responsible. Fashion is the second most polluting industry in the world. The fashion industry needs to become more responsible with its actions and help to reduce the pollution associated with production.‘

When discussing the potential of Montreal, Gabrielle says Streetwear or even higher-end clothing might expand in the future. However, she doesn’t feel ‘Haute-Couture’ can be relevant in city such as Montreal. ‘People here are not willing to spend money on garments compared to how they do in Europe. Therefore, I think BRIELLE would need to relocate to Europe for Haute Couture. Personally, London is the most ideal location. London is dark and yet full of light at the same time.‘ Even if the level of creativity is often questioned, the reality is that Montreal is providing a very technical education for their students in fashion. Schools like Lasalle College are often considered stricter in terms of technical training when compared to those of Europe, that are mainly focused on the artistic side of fashion.

London or Montreal, it remains the same, designers from various culture want to be part of the change by investigating alternative solutions to create fashion. From inclusivity to sustainability, the goal is to help to make things better for the environment and mankind. These aspirations are bigger than intangible borders. They are no barriers to prevent us from adding your contribution. Action can be taken by everyone, everywhere. ‘If my work can inspire people to be more loving towards the planet then it would be a nice contribution to the cause.‘

Beyond garments, Gabrielle wants her vision to be understood by everyone. Therefore, almost every collection comes with a poem: ‘I think it is important to have some words alongside my collections. For some people, who aren’t into fashion or who do not connect to it, the poetry can help them understand the concept.’ Using various medium to build a better understanding of a collection can help to connect with a wider audience, including the art world. While we all agree on the fact that ‘Haute-Couture’ is clearly an art, having the professional accreditation can be a hard and long journey. But as on this PLATFORM, we are mainly exploring alternative ways to do and make fashion, Gabrielle’s approach highlights a real opportunity for ‘Haute Couture’ to expand.

For now, Haute Couture remains a very small world, with well established brands supported by prestigious institutions. Schiaparelli, Giambattista Valli, Chanel are among those who have the honorable distinction. Through their techniques and craftsmanship we can understand why. However, emerging designers are slowly but surely shaking this traditional order as they are already doing in the RTW segment. They don’t necessarily need confirmation from official organisation to create their collection using ‘Haute-Couture’ technics. Are we about to witness the collapse of ‘Haute Couture’ old models? Not really sure about it. Although it is hard to be so determinist for now, what is certain is that we are witnessing alternative possibilities for ‘Haute-Couture’ to be used in the fashion industry overall.